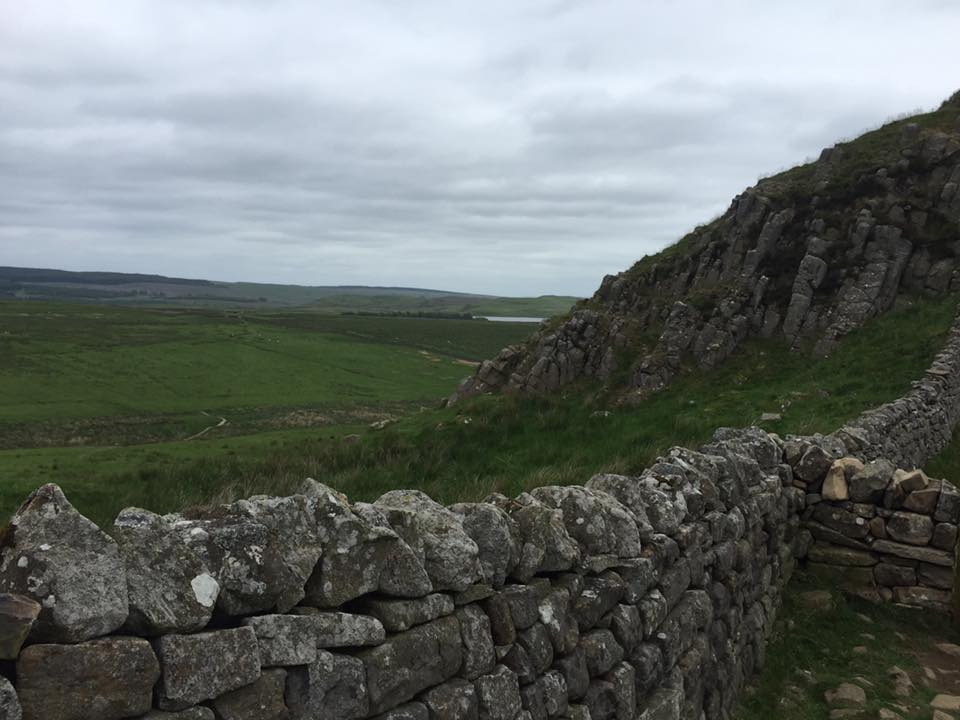 Housesteads Roman Fort is one of many outposts once inhabited by Roman soldiers in the early A.D. era.  These walls were originally built to keep the Picts (northern tribes from the area we now know as Scotland) out of Brittania — the area we’ve come to know as Great Britain — after it was conquered by the Roman Empire.

According to Hadrian’s Wall Country:

On becoming Roman Emperor in 117 A.D., Hadrian set about making the Empire more secure, separating Roman and Barbarian territories. The most spectacular example of this is the great Wall he ordered his army to build to define the north-west frontier of the Roman Empire. It was a gargantuan task which he came to inspect in 122 A.D. while work was in progress. The Wall sprawled across 73 miles from Wallsend in the east to the Solway Firth in the west. Although the curtain Wall itself finished at the Solway Firth, its forts, milecastles and turrets continued down the Cumbrian coast to Maryport with further forts marking the miles beyond to Ravenglass.

Emperor Hadrian sought to demonstrate the vast military power of the Roman Empire with the wall.  There were fully functional outposts along the wall where soldiers and the families of soldiers were permanently stationed, full of living quarters, training facilities, and mess halls.  These milecastles existed every few miles along the wall, and garrisoned soldiers were responsible for patrolling the wall and ensuring that there were no breaches.

The wall’s presence was as much of a deterrent as the soldiers themselves.  The general idea is that tribemesn from the north would be as intimidated by the wall as they were limited by it, and thus excursions over the wall were rare at best.

Two misconceptions that should be approached:

Housesteads is one of many ruinous milecastles along the wall.  The English Heritage site for the Housesteads location states:

Lying midway along Hadrian’s Wall, Housesteads is the most complete example of a Roman fort in Britain, and one of the best-known from the entire Roman Empire. It was built within a decade of AD 122, when work on the Wall began, and was garrisoned by an 800-strong infantry regiment until the end of the 4th century. Excavations have revealed major buildings, defences and the civilian settlement outside its walls.

Housesteads was a large fort covering 2.2 hectares, garrisoned by auxiliaries – infantry and cavalry raised from the conquered peoples of the empire. It was intended from the outset to hold an infantry regiment of 800 men, known as a milliary cohort…This unit of auxiliaries was originally recruited from German-speaking tribes in the district of Tongres, in modern Belgium. The unit had earlier been stationed at the nearby fort of Vindolanda, south-west of Housesteads: a tombstone from there records the death in battle of a legionary centurion commanding the regiment, probably early in Hadrian’s reign (AD 117–38).[3] The date of the unit’s move to the Wall at Housesteads is not known for certain.

Further evidence for the early presence of the Tungrians derives from two inscriptions. One is a small building stone with the initials of the cohort, used in the lower wall of the granaries – one of the original buildings of the Hadrianic fort, which underwent major rebuilding in AD 205–8.[4]

The second is a dedication by the first cohort of Tungrians to ‘the gods and goddesses’ in accordance with the oracle of Apollo in Claros, now in western Turkey.[5] Ten similar texts known from across the empire have all been associated with the outbreak of plague about AD 165.[6]

The following is a video from a reenactment and public demonstration in 2016 of what Hadrian’s Wall may have looked like when inhabited with soldiers.

Hadrian’s Wall, as an architectural accomplishment, has been represented throughout literature.  Walls are regularly incorporated in dystopian novels to separate one class or type of people from another, and certain types of people are compartmentalized into castes and sections.

The most visible contemporary reference to Hadrian’s Wall exists in George R.R. Martin’s epic fantasy series A Game of Thrones, in which a northern country of “wildlings” are separated from the “civilized” by a massive wall manned at various outpost-castles along its length.  History Behind Game of Thrones explains the inspiration according to Martin’s own reflection:

A friend of mine…had just moved to Scotland and was giving me a tour. We were driving in her car and got to Hadrian’s Wall at the end of the day. The tour buses were leaving. We walked along the top of the wall just as the sun was going down. It was the fall. I stood there and looked out over the hills of Scotland and wondered what it would be like to be a Roman centurion from Italy, Greece, or even Africa, covered in furs and not knowing what would be coming out of the north at you. I wanted to capture that feeling.

Obviously, Martin’s exaggerated representation of the wall “is more like how Hadrian’s Wall might have loomed as a symbol in the Roman psyche – much bigger than reality, more daunting, dividing the imperium from barbaricum, and the realm of light and warmth from a realm of darkness and cold.”

Around Hadrian’s Wall, keep your eye out for these:

Remnants of the heated floor.  Higher-ranking officers had access to barracks that had heated floors, and heat was distributed underneath the floor by using tended coals and fires.

Pass-throughs.  Near Hadrian’s wall there are one or more pass-throughs that would have allowed objects or troops to filter in or out from the north.

Missing stones.  You’ll find that Hadrian’s Wall is not too dissimilar to the stone farm-fences that litter all of Yorkshire.  Many stones on Hadrian’s Wall are missing because local farm-tenders over the past few hundred years have borrowed stones for the completion of their own farmsteads.

Hadrian’s Wall.  1.5 to 3 miles round trip.  Hiking along Hadrian’s Wall is simple and straightforward: put the wall to your shoulder and walk.  Start at Housesteads and proceed at a reasonable pace until desired.

Choose one of the following prompts to complete in your writing and reflection journal. Read these beforehand, as your chosen prompt may have tasks to complete throughout the day.

Take on the role of a Roman soldier or the member of a Roman soldier’s family and write a brief 200-300 word inner dialogue about life and experiences stationed or living at the milecastle.  Incorporate effective language to make the descriptions truly come alive.

Alternatively, imagine yourself as a Pict — one of the tribal northerners — and describe your first impression of Hadrian’s Wall.  Use all the tools in your creative writing toolbelt to truly capture the majesty, power, and overwhelming qualities of what you see.  You need only write approximately 200-300 words.

Establish a pictoral travelogue of your trek along the wall.  Take pictures from compelling angles that capture the wall’s historical power and also reflect the wall’s reduced state.  Take upwards of 10 pictures that capture your experience for the day and caption them effectively.

About “Paths in Yorkshire”

These lessons, complete with hikes, reading, writing prompts, and points of interest in serene Yorkshire, England span a survey of significant literary and historical landmarks to enlighten visitors of any age. These are intended to be educational in nature, allowing students and learners to follow the footsteps of the Romantics, the Lake District muses, Ancient Romans, and others. The trip is curated and organized by Courtney Fitzgibbon, and academic material on this site has been compiled by Rance Denton.